According to an analyst at Roth Capital Partners, Apple (APPL) tried to secretly buy Tesla (TSLA) in 2013 for more than the company is worth today. (And perhaps more than it’ll ever be worth again.)

Allegedly, Apple made a “serious bid” on Tesla for $240 a share — $40 more per share than the stock was worth at open this morning.

“This is something we did multiple checks on.” said analyst Craig Irwin in an interview with CNBC. “I have complete confidence that this is accurate. Apple bid for Tesla. I don’t know if it got to a formal paperwork stage, but I know from multiple different sources that this was very credible.”

Tesla’s stock opened at $199.57 this morning, down 38% from the start of the year and 46% from its 2019 high (when living lawsuit Elon Musk tweeted he was taking the company private at the funny weed number).

Imagine if the fate of your billion dollar company rested on the tweets of this anime-loving homunculus.

Tesla’s shares continued their downward trajectory yesterday after analysts at Morgan Stanley revised their bear case for the stock from $97 to just $10. (Woof. That bear went from “Paddington missing lunch” to “starving grizzly” in 10 seconds flat.)

“Demand is at the heart of the problem,” said the Morgans Stanley analysts. “We believe Tesla may have oversaturated the retail market for (electric sedans) outside of China.

“Tesla has grown too big relative to near-term demand, putting great strain on the fundamentals. The departure of key executives, price discounting, and extraordinary cost-cutting efforts add to the narrative of a company facing real potential stress.”

According to some reports, Apple is building dry rooms which are used in the production of the Lithium batteries used to power electric vehicles (EV).

It may be that Apple is prepping for the acquisition of an EV company, or its shifted focus and plans to simply build its own “Apple Cars.” (Ten bucks says Apple will sell the steering wheel as a separate accessory.)

If Apple were to buy Tesla, it would be the biggest acquisition in the history of the tech industry — and a blockbuster day for investors. But it’s possible that Apple’s just building those dry rooms to explore producing iPhone batteries in-house. (Or for storing Steve Jobs’ sense of humour.)

Regardless, could you see yourself buying an Apple car in the future?

You’d probably have to pay an enormous premium over the cost of the already expensive EVs. And I can’t see what they’d bring to the table to make them stand out from the competition.

Analysts Predict Chicago Will Be the Best at Weed

A new study predicts that Illinois and the Eastern states will dominate the emerging marijuana industry in the next five years.

According to the Brightfield group, Illinois’ “wait and see” approach to legalisation gives them a stronger legal foundation than the “shoot from the hip” approach of those laissez-faire Californians.

Then again, the Brightfield group is based in Chicago, so they might be a little biased (and a tiny bit drunk). 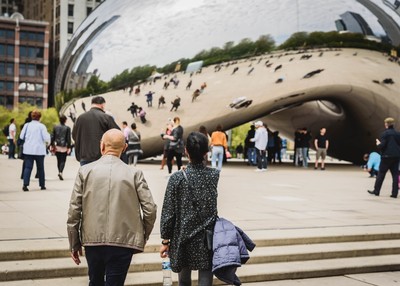 Little known fact: The head of Chicago’s executive branch is The Bean. All hail the Bean.

According to the researchers, (who couldn’t pass up an opportunity to dunk on some Californians):

“While California has been fumbling with a regulatory nightmare and growth rates slow to low single digits in existing recreational markets, many of the more populous markets along the East Coast and in the Midwest are scaling dramatically in size and offer much greater long-term potential as legal and entry barriers begin to soften. Crossing the Mississippi: U.S. Cannabis Market.”

Right now, the Western states make up more than 40% of total cannabis sales in the U.S. But by 2023, the Brightfield Group estimates the balance will shift sharply to the East.

According to the study, Eastern states will take 34% of the total market share, while the West is expected to backslide to about 20% (because instead of careful planning they spent all day smoking weed on the beach).

The Brightfield Group estimates that the total U.S. cannabis market could reach $22.7 billion by 2023, at a compound growth rate of 20% a year.

Brightfield believes that the states east of the Mississippi will dominate this rapidly growing industry. But if you play your cards right, it doesn’t matter who wins or loses.

(Is there anything more emblematic of the inefficiency of government than literally not being able to build roads because of bipartisan bickering?)

Just three weeks ago, President Trump and Dem leaders agreed to work together on this $2 trillion infrastructure plan.

But President Trump says he refuses to deal with the Dems as long as they are discussing plans for his impeachment, or as the president calls it: “the ‘i’ word”.  (Which would be a great name for a reality TV show about impeachment. Or immigration. Or ice cream. Great. Now I’m hungry.)

Until now, House Speaker Pelosi has been dead set against starting impeachment proceedings against the president. She believes that trying to impeach Trump would only make the Dems look bad and end up costing them the 2020 election.

But after a meeting with rank and file Dems this morning, Pelosi told reporters that the Democratic party believed Trump was engaged in a “cover-up.” (Hey Nancy. You don’t accuse someone of being a criminal on live television five minutes before you have a meeting with them. Not the best way to kick off negotiations and, at the very least, kinda rude.)

After their meeting abruptly ended, Trump made an appearance in the Rose Garden and said talks wouldn’t resume until the Dems “get these phony investigations over with.”

“I respect the courts, I respect Congress, I respect right here where we’re standing. But what they’ve done is abuse.” 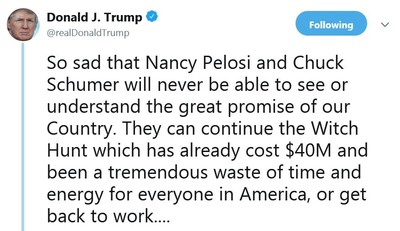 Trump followed up with a barrage of tweets attacking Pelosi and Schumer because there’s only so much you can say in the Rose Garden.

At Google’s keynote speech at I/O earlier this month, a Google employee demonstrated a new feature coming to Google smartphones next year.

On the surface, it seemed like a simple update to an existing feature. But those with a bit of tech savvy could tell there was something world-changing happening on stage.

The Google employee dictated an email to her phone.

Fairly unremarkable. But there were a few moments that highlighted the staggering progress Google has made with the tech.

Now, to you and I that may seem pretty innocuous. But in a piece of voice recognition software, it demonstrates an understanding of the subtle cues of human language which has previously been unintelligible to AIs.

In fact, the progress happened at such a breakneck speed that there’s no way that these advances were coded by a human. And that’s the nugget of gold hiding under this boring email presentation.

Google is using a new type of tech that allows the software to learn and teach itself — a concept thought to be pure science fiction until recent years. And its applications go far beyond chatting with your phone.

Some investors are even using this tech to predict movements in the market.

My researchers are keeping a close eye on this. I’ll update you as soon as I know more.

STUDY: This Reduces Cravings and Anxiety

Economy
Author Jim RickardsPosted on 31st July 20175th July 2018
US-Russia relations are normalising because a US-China conflict is coming.
Economy
Author Kit WinderPosted on 10th February 202110th February 2021
I talk a lot about vehicles and emissions from a systemic perspective. Subsidies, fleets, models, range, batteries… and it’s all good. But I think...

Economy
Author Zach ScheidtPosted on 6th December 20199th December 2019
“The stock market is only for the rich to get richer!” With the left taking aim at the wealth on Wall Street, I understand...