With stock markets at record highs and the global economy growing great, another financial collapse (such as 30 years ago in 1987) may not be on the cards.

With stock markets at record highs and the global economy growing great, another financial collapse (such as 30 years ago in 1987) may not be on the cards.

But the present equity and economic nirvana could be as good as it gets.

Growth rates are most likely to reverse after activity has been very strong. And historically, that’s been bad news for share prices.

What’s more, the current economic expansion is based on dodgy foundations, as the IMF has just noted. Add in some policy changes…and suddenly the next crash starts to look much more likely…

For an example of the inverse effect of strong economic indicators, take America’s ISM Manufacturing Index. Any reading above 50 indicates growth. And in September, the ISM measure soared to a 13 ½-year high of 60.8.

Yet this may not be as promising as it sounds. Such a reading “typically marks peak growth – and presages economic and equity deceleration”, says Goldman Sachs’ chief US equity strategist David Kostin. “Since 1980, the ISM has exceeded 60 in eight separate episodes; four of those lasted only one month”.

As Bloomberg notes, such events have historically been followed by a dip in US equities. On those eight occasions, the S&P 500 index has averaged negative returns on both a three-month and a six-month basis.

We’re only talking here about small dips in equity prices each time.
Hardly a crash…

But as I pointed out last week, both stock and bond markets are in bubble territory right now, so the chances of a serious crunch are much bigger than normal.

Indeed, the IMF is now on the case.

In the past I’ve been a bit cynical about this noble institution. I’ve accused it of reacting to events far too late, rather than trying to anticipate problems.

The IMF does, though, publish a document called the Financial Stability Report.

Sure, that’s a fairly desiccated title. As is the Report’s latest offering: “Could Rising Medium-Term Vulnerabilities Derail the Global Recovery?”

I know. It sounds like a handy cure for insomnia.

Please bear with me, though. It’s well worth taking a second look.

The Report talks about “how shocks to individual credit and financial markets well within historical norms can propagate and lead to larger global impacts because of knock-on effects, a dearth of policy buffers and extreme starting points in debt levels and asset valuations”.

“A sudden uncoiling of compressed risk premiums, declines in asset prices and rises in volatility would lead to a global financial downturn. With monetary policy in several advanced economies at or close to the effective lower bound, the economic consequences would be magnified by the limited scope for monetary stimulus. Indeed, monetary policy normalization would be stalled in its tracks and reversed in some cases”.

Let’s translate that into plainer English.

The IMF is saying that because both global debt and market valuations are so high, a normal-enough shock to the system could have a much bigger-than-normal effect.

In fact, financial solids might hit the air-con. Very hard.

Central banks have already used up their bags of tricks. So they could only try to stop the financial carnage by cutting interest rates (probably to negative levels) and printing even more money.

Granted, overheated stock and house prices might keep climbing for a while. Lenders remain happy to fund the apparent value increases. Borrowers’ leverage rises further, with investors also taking extra risks in their search for yield.

But this can’t continue. It leaves markets exposed to that “decompression of risk premiums”, says the IMF, i.e. danger levels rising again. In that case, credit spreads – the yield gap between high and lower-quality bonds – will widen.

Starting in early-2020, equity and house prices could drop by up to 15% and 9% each. So markets would freak out about debt sustainability. Risk premiums would jump further. Deleveraging pressure would build as high debt-to-income ratios would make borrowers more vulnerable to more shocks.

Financial conditions would tighten further. There’d be a flight to quality in bond markets. Highly-leveraged and overvalued assets would be hit particularly hard. Economic growth would suffer. State debt ratios would climb. Emerging market economies would get clobbered. Corporate and household defaults would rise on the back of higher interest costs, lower earnings and weaker growth.

If you feel like shouting AARRGH! In the middle of this lot, I don’t blame you.

As the IMF points out, it would only be a return to something like normality. But it would very painful indeed as bond, stock and property prices tumbled.
Sure, this isn’t new news for DR readers. Almost four months ago I wrote that the days of easy credit were numbered.

Now the countdown has now started.

And for today’s final word, it’s over to Jeff Gundlach, otherwise known as the ‘bond god’. His Los Angeles-based firm DoubleLine Capital looks after $116bn, which is mainly invested – as you’d expect – in bonds. So he’s bound to be a bond bull, right?

Wrong. “I’m not a big fan of bonds right now,” he tells Vanity Fair. “We’ve been in an artificially-inflated market for stocks and bonds largely around the world.”

To put the risks in owning bonds today into perspective, Gundlach has a very alarming chart for us – here it is: 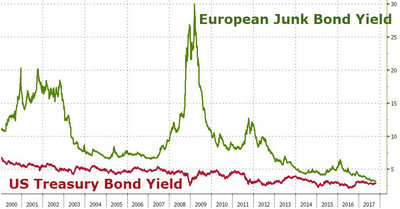 This shows how European “junk” bond players are currently prepared to take the same low returns as holders of US Treasuries.

The latter are amongst the safest investments on the planet while junk bonds are what they say on the tin. The two risk profiles couldn’t be more different. Similar yields = madness.

This situation has resulted from central bank “manipulation”, says Gundlach.  European interest rates “should be much higher than they are today”. When that does happen, “the financial system will be turned upside down and it won’t be a good thing. The liquidity that has been pumping up the markets will dry up in 2018 [and] things go down.”

Of course, there are no guarantees about the exact timing. A shock could happen at any time. And maybe I’ll have to stop being rude about the IMF – because it’s called the next crash right after all!

The cobalt boom, by the numbers

Economy
Author Shane OrmondPosted on 20th June 201921st June 2019
If you were planning on not starting a war in the Middle East today, it might be time to cancel your plans. Early this...