In a historic moment, Republican and Democrat lawmakers met yesterday to discuss an issue and they ACTUALLY AGREED WITH EACH OTHER. (Kiss your loved ones goodbye, folks. I’m pretty sure this is one of the seven signs of the apocalypse.)

The House Judiciary Subcommittee on Crime, Terrorism and Homeland Security met yesterday to discuss widespread marijuana reform in a hearing titled “Marijuana Laws in America: Racial Justice and the Need for Reform.”

(Next week on the slate: “Tuna Surprise in the Congress Cafeteria: Is Anyone Even Surprised Anymore?”)

During the discussion, members of Congress from both sides of the aisle broadcasted their support for loosening laws and even widespread marijuana legalisation.

“Marijuana decriminalisation may be one of the very few issues upon which bipartisan agreement can still be reached in this session,” said Californian Republican Tom McClintock. “It ought to be crystal clear to everyone that our laws have not accomplished their goals.”

McClintock’s fellow Californian, Karen Bass agreed (about the time the rain of frogs began) saying, “There is a growing consensus in this country that current marijuana laws are not appropriate and we must consider reform. Today’s hearing is a first step in that process.”

To date, eleven states have legalised recreational marijuana and, for the first time ever, the majority of Americans support legalisation, including a large percentage of the older population.

But while everyone was in agreement that “something” needed to be done, lawmakers struggled to agree on what specifically should be done. (It wouldn’t be Congress otherwise.)

Currently, the bill with the most momentum is the STATES Act, which would give states the right to decide for themselves and clear the 11 states that have already legalised of any federal complications.

Justin Strekal, director of the marijuana advocacy group NORML (real SUBTL, guys), made a triumphant statement after the hearing:

“Today was a historic day in the fight to end federal marijuana criminalisation,” said Strekal. “Members of both political parties demonstrated a desire to reform our nations failed policy of prohibition and the only disagreement was how, not if.”

The day weed is legalised nationwide is coming. And it’s going to be a blockbuster day for weed investors.

Iran Clashes with UK Navy in the Strait of Hormuz

Crude oil prices spiked yesterday, as tensions in the Middle East rose and Iran threw its toys out of the stroller.

A standoff between Iranian vessels and a British oil tanker in the Strait of Hormuz was resolved peacefully with the intervention of the UK Navy. (And by peacefully I mean no shots were fired. Everybody’s still real mad at each other.)

According to UK officials, three ships attempted to block the BP-operated British Heritage from passing through the vital shipping lane. Fortunately for the folks on board, the ship had a naval escort which was able to disperse the ships with good old fashioned diplomacy (pointing its massive guns at them).

Just yesterday, a spokesperson for the Iranian Revolutionary Guard said in a statement that Iran would retaliate against the seizure. But today Iran denied trying to impede the British tanker but said it totally could if it wanted to. (This is either a game of genius 4D chess or the dumbest thing I’ve ever heard.)

A spokesperson for Prime Minister and job seeker Theresa May told reporters, “We are concerned by this action and continue to urge the Iranian authorities to de-escalate the situation in the region. We have a long-standing maritime presence in the Gulf.

“We are continuously monitoring the security situation there and are committed to maintaining freedom of navigation in accordance with international law.”

The standoff caused a three-cent spike in oil prices. Oil prices have rallied more than 10% in June and July over growing fears of a disruption in the supply of oil. 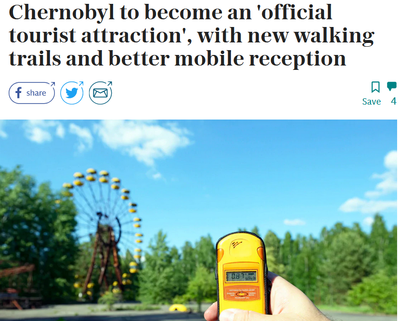 Gasp. All those extra radio towers could give people cancer!

President Trump plans to announce an executive action related to the 2020 census at a Rose Garden press conference this afternoon. (Aw, it’s always nice to have an excuse to get out into the Rose Garden.)

White House officials are staying tight-lipped on the details of the announcement (probably because they’re not sure what’s going on). But the president is expected to address the addition of the citizenship question to the census that was blocked by the Supreme Court.

Are You a Citizen? The administration says it would like to add a citizenship question to the census to get an accurate account of undocumented immigrants. Critics say the question will have the opposite effect, resulting in minorities and immigrant communities being undercounted, which would affect the distribution of federal funds and voting power.

After the Supreme Court ruled that the administration did not offer sufficient reasoning for the addition of the question, the Department of Commerce announced it was going to go ahead and print the forms without the question.

B-u-u-u-t they probably should have checked their Twitter feed first.

President Trump declared/tweeted “They’re spending 15 [billion] to 20 billion dollars on a census,” Trump told reporters on Sunday. “They’re asking everything except, ‘Are you a citizen of the United States?’ How ridiculous is that? So we are moving forward. We have a couple of avenues.” 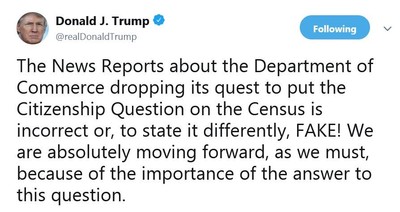 President Trump is expected to make his announcement today in the Rose Garden, after we’ve gone to print.

Reports suggest that this “executive action” might not be a full-blown Executive Order but that remains to be seen.

Why we should worry about currency-warring politicians

Economy
Author Jim RickardsPosted on 4th September 20175th July 2018
Why a mega devaluation could be just around the corner...

Economy
Author Sean KeyesPosted on 9th August 20165th July 2018
Extinguishing forest fires is like bailing out banks. Like accumulating twigs on a forest floor, bailouts build up trouble in the banking system.

Stock Market
Author Kit WinderPosted on 20th May 202020th May 2020
You need to start thinking about alternatives to the FAANG+ stocks. The current narrative of eternal growth in cloud computing and digital advertising is blindly accepted by nearly everyone....
Economy
Author Kit WinderPosted on 18th May 2020
It’s been a few months now, and in my mind I’ve been roughly building out an approach to investing both in and out of a crisis. Today I’m going...
Load More