What’s more, the public purse is looking less empty than before while the country’s dole queues are shortening.

But enjoy it while it lasts. The good times may not continue for much longer…

It’s always nice to see positive economic news. I won’t say ‘for a change’ because – to be fair – much of the UK’s financial data following the 2016 Brexit poll has been at least OK. That’s in marked contrast to some of the dire warnings that were circulating in the immediate aftermath of the referendum result.

For starters, February’s figures for Britain’s state finances were quite promising.

Public sector net borrowing excluding public sector banks – the amount of debt the country is incurring and called ‘PSNB ex.’ by economists – was £1.3bn in February. That was lower than the consensus estimate of £1.8bn, notes Samuel Tombs of Pantheon Macroeconomics.

In this month’s Spring Statement which I reviewed in the Daily Reckoning last week , the OBR (Office of Budget Responsibility – the government’s independent financial watchdog – published a full-year forecast for state borrowing of £45.2bn.

Now this “might be a little too high“, says Tombs. “Borrowing will total £43.3bn this year if the trend in the first 11 months of the fiscal year persists in March and the data are unrevised”. With “the only worrying sign being unchanged VAT receipts in February, which hints that consumers’ spending still is growing only modestly, the public finances appear to be recovering steadily.”

Put another way, the Chancellor might have even more scope for tax cuts later this year than he implied in the Spring Statement.

Even better, the UK’s jobs picture is at its brightest for ages. In the three months to January 2018, the country’s unemployment rate dropped to a better-than-expected 42-year low of 4.3%. The last time it was this level was in 1975 when Harold Wilson was PM (I feel very old when admitting to remembering it). To put things into perspective, between 1971 and 2018 Britain’s unemployment rate averaged 7%.

What’s more, the UK’s employment rate – the percentage of the working-age population that has a job – has now returned to a record high of 75.3%.

And if there are more people in jobs, upward pressure on wages grows.

That’s happening at the moment. The annual growth rate in the headline (three-month average) measure of weekly earnings rose from 2.7% in December 2017 to 2.8% in January. That was the highest since September 2015 and in excess of the 2.7% increase in February’s consumer price index. In other words, Britons’ wages are now growing once again in ‘real’, i.e. inflation-adjusted, terms.

Bonuses made the difference

Granted, bonus payments have boosted the January rise. While growth in regular pay (i.e. excluding bonuses) also picked up, the increase here was from 2.5% to 2.6%. But UK pay trend growth could continue for a while. Indeed, “with CPI inflation now falling, and pay settlement surveys remaining strong, it shouldn’t be long before we see real pay picking up more materially“, says Ruth Gregory at Capital Economics.

That would be very handy for Britain’s hard-pressed consumers. And the employment data are to be widely welcomed.

Let’s enjoy it while it lasts, though.

The good times may not continue for much longer.

The Bank of England’s interest rate-setting MPC (Monetary Policy Committee) will have noted the pay rise numbers. For a long while, the absence of upward UK wage pressure has lessened the need for higher interest rates. But now the MPC has to take account of another potential contributor to inflation. It surely means that a May hike in bank rate (of 0.25%?) has become more likely.

While that would affect many individuals, it wouldn’t at this stage be too significant for Britain’s overall economy. Yet with UK consumer credit still expanding an alarming 9%-plus rate, i.e. more than three times faster than either prices or wages, there’s longer-term cause for concern on this score.

And a potential interest rate rise is by no means the only fear. As I also mentioned last week , we may not be too far from the next recession.

As the OBR notes, there have been seven recessions over the last 61 years. This suggests there’s a 50% chance of one occurring within the next five years. While that doesn’t just apply to Britain – it’s a global concern – some worrying signs are starting to appear in the money markets.

I’ll keep this brief today – it’s a topic to which I’ll be returning in the near future.

The London Interbank Offered Rate (LIBOR) is the key benchmark interest rate for short-term loans around the world. It’s a reference point for most leveraged loans, interest-rate swaps (derivatives that reduce or increase exposure to fluctuations in interest rates) and some mortgages. And as the chart shows, LIBOR has risen to its highest level since the great financial crisis of 2008-09. 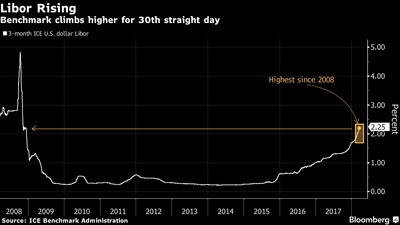 Why? There are several reasons, most of which I don’t have space for today. But the bottom line is that it indicates a steady build-up of financial market stress and tightening credit conditions.

Is this a precursor to the next financial crisis? I believe the answer could in the affirmative. Even if not, it still makes sense to get some insurance in place. And the classic safe haven – as you’ll know if you’re a regular DR reader – is gold. As a TV series from the Harold Wilson days urged us back in 1975: “Get some in!”

Will you choose to cash in on Canada's 'green rush'?

Trump will use the "nuclear option" on trade

Economy
Author Kit WinderPosted on 29th April 2020
How have our overlords and rulers performed in the current crisis? It’s a really interesting question and I’ve heard a true variety of answers....

Economy
Author Jim RickardsPosted on 4th September 20175th July 2018
Why a mega devaluation could be just around the corner...