I’d like your opinion on the most pressing problem of our time.

It’s a difficult and important question so first, please read what follows carefully…

It’ll give you a little background.

We, you and I,  are members of a once proud nation.

When Britannia ruled the waves we were world leaders.

Then the wars ruined us.

They left us crippled as our enemies prospered.

Germany thrived as the UK struggled.

Because of continued economic weakness.

Love or loathe her, it wasn’t until Thatcher took charge and implemented unpopular and difficult – but ultimately worthwhile – ideas from economist Friederich Hayek that Britain lost its embarrassing nickname and restored our dignity internationally.

As I travel the continent and the US everyone asks me differing variations of the same question:

“What’s going so wrong in the UK?”

I usually reply with something along the lines of, “Hell if I know”.

But the truth is the problems are fairly clear.

The most damaging crisis is economic.

It may seem like we’ve recovered from 2008 but interest rates remain low and we are under serious threat from a second – and long overdue – crisis from which it will be more difficult to recover.

Not only that, but UK productivity has stagnated in the past decade.

2% per year is a nice healthy target.

In Europe, only Italy’s productivity has been slower – and they can blame it on long walks in the sunshine, cappuccinos, and long family meals.

Stagnated productivity means that for someone to get richer, someone else gets poorer.

And the wealthy are getting wealthier – profiting from cheap credit and cheap purchases following the crash.

And who can blame them?

You’d benefit, too, wouldn’t you?

But rising income inequality always leads to political – and often civil – disaster when pushed to the extreme.

But we may have to brace ourselves for rough waters first before we can enjoy calmer waters.

We’re also struggling for unity and a positive national identity.

We’re all torn over Brexit and lack inspiring leadership.

To use the sailing analogy again – it’s as if half of us are rowing while the other half drop the anchor.

The problem is we all believe we’re rowing and it’s the others who are holding us back because we can’t agree on how to move forward.

I ardently believe in the heart of the British people to come together and come out stronger in the end.

But we face complex problems in complex times and I fear we’ll struggle and stagnate for a good while yet.

We built this great country on conquest.

Where once we were thought leaders in politics, law, and economics – the foundations of Western civilisation – today we’re in the middle of the pack.

In real life there are no participation trophies.

Our glory days have passed…

And I wouldn’t dream of suggesting a return to territorial conquest.

We live in a different world now…

A world of technology and ideas.

But it needn’t be that way.

We need a new conquest.

We need thinkers to shape the ideas that will lead the way to economic growth and put us back where we belong.

Perhaps Brexit will help us.

I’ll ask your opinion on something related to that in our poll in a moment.

But first a quick roundup of the Brexit news from the week: 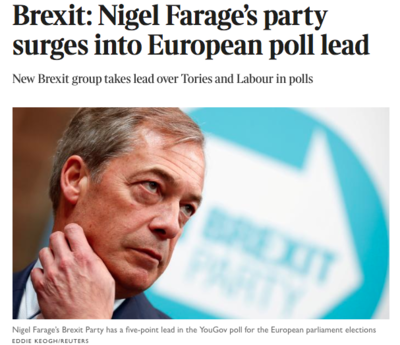 From The Times – You can read the full article here.

Nigel Farage’s Brexit Party is leading the polls for UK seats in the EU according to two opinion polls.

“Having formed only in January, the party has leapfrogged Labour and the Tories and eaten into Ukip’s support.”

Whatever you believe, Farage’s presence clearly resonates with a significant amount of Britons.

But Brexiters suffered potentially damaging news from Nancy Pelosi, Speaker of the House and the most powerful US democrat, as she visited Ireland and London this week.

“There will be no chance of a U.S.-U.K. trade deal if Brexit puts at risk the 1998 peace accord between Ireland and Northern Ireland”, Nancy Pelosi said Wednesday.

A US deal is the ultimate prize for the free-trading, ‘Global Britain’ Brexiters.

It would demonstrate Brexit’s success – that it allowed the UK to negotiate and land big deals as an independent trading nation.

With all this in mind, let me now ask for your opinion in this week’s poll.

Would you accept unpopular and difficult ‘Thatcherist’ economic measures for four years if you believed it would restore the UK’s dignity and lead to true and consistent economic growth post-Brexit?

The last poll received around 2,900 answers.

We’ll reveal the results next week.

Economy
Author Sean KeyesPosted on 17th November 20175th July 2018
You’d never know it from looking at cars on the road. But the car industry has turned upside down in the last year. The...

Economy
Author David StevensonPosted on 6th February 20185th July 2018
As I write, the FTSE 100 index is down about 2% today. That takes the fall from the mid-January to around 7.5%.