Could we please get through one week without Facebook doing something evil or weird? I have a limited amount of space to work with here, and your creepy ass company is taking up all my time.

The Department of Housing and Development (HUD) was up bright and early this morning, charging Facebook with violating fair housing laws.

Allegedly, Facebook’s algorithms hide certain ads from black and Hispanic users. Which is fine if you’re selling pukka shell necklaces to surfer bros. But if those ads are for housing or employment… well, that’s a federal crime, Mark.

According to HUD Secretary and man-just-moments-from-sleep Ben Carson:

“Facebook is discriminating against people based upon who they are and where they live. Using a computer to limit a person’s housing choices can be just as discriminatory as slamming a door in someone’s face.”

ProPublica first raised concerns over Facebook’s advertising practices in 2016, when reporters found that the “ethnic affinities” tool could be used to block black or Hispanic users from seeing specific ads. 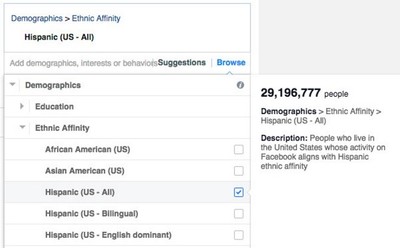 Ethnic Affinity is a fun way to avoid saying “race.”

Using this tool, employers and real estate companies could racially target their ads.

Facebook has since trimmed most of those features from its system. But according to the HUD complaint, Facebook’s automatic algorithm is still hiding opportunities from users of color, even if an advertiser is seeking to reach a diverse group.

“Even as we confront new technologies, the fair housing laws enacted over half a century ago remain clear — discrimination in housing-related advertising is against the law,” said HUD General Counsel Paul Compton. “Just because a process to deliver advertising is opaque and complex doesn’t mean that it exempts Facebook and others from our scrutiny and the law of the land.”

Facebook’s (NASDAQ) stock hasn’t recovered from the 20% drop in July of last year, which cost the company $120 billion in value.

Part of that is the endless parade of negative press surrounding Facebook. If it isn’t racist math or company mismanagement it’s security breaches and privacy violations.

But according to our tech trends expert James Altucher, the real problem is that millennials are leaving Facebook in droves for a new social media alternative:

“People are flocking to a new social media alternative that already has a market larger than Twitter, Instagram, AND Facebook’s audience,” says James. “The biggest companies in the world are already scrambling to get into this explosive opportunity.”

CNBC reported that: “The market for [this social media alternative] is going up like nothing I’ve ever seen.”

Salesforce, one of San Francisco’s largest software companies, has been accused of supporting and profiting from human trafficking.

(Not a great look for a company that bills itself as an advocate for human rights and gender equality.)

Fifty women are suing the marketing software company, alleging that it knowingly helped website Backpage become an online hub for crime and prostitution.

Back Page of the Internet:

The women, named only as Jane Does in the suit, are victims of trafficking, rape, and abuse facilitated through Backpage.

Obviously, Salesforce (who has a market valuation above $120 billion) is going to deny they had any knowledge of Backpage’s wrongdoing.

But the suit alleges that Salesforce didn’t just sell Backpage some marketing software. They custom built the foundation of the entire website. And were still offering Backpage higher priced packages and additional services after the website was first accused of being a hub for human trafficking in 2013. (Classy move.)

In public, including on Twitter, Salesforce boasted about fighting human trafficking using its data tools. But behind closed doors, Salesforce’s data tools were actually providing the backbone of Backpage’s exponential growth. Salesforce didn’t just provide Backpage with a customer-ready version of its data and marketing tools.

Salesforce designed and implemented a heavily customized enterprise database tailored for Backpage’s operations, both locally and internationally. With Salesforce’s guidance, Backpage was able to use Salesforce’s tools to market to new “users” — that is, pimps, johns, and traffickers — on three continents.

Over the last week, Salesforce’s (NYSE: CRM) stock has fallen more than 7%.

I’d like to get your perspective on this one, folks. Are Salesforce monsters? Should a company be held responsible for how others use their tech? (Mark Zuckerberg doesn’t think so.)

A report released by the “Huawei Cyber Security Evaluation Center” has raised concerns over the company’s commitment to cybersecurity and basic engineering skills.

According to the report, Huawei’s products lacked “basic engineering competence” and “cybersecurity hygiene.” (This is actually a “sick burn” if you’re a nerd.)

In layman’s terms: Huawei’s cybersecurity is Swiss cheese and any dumbass with a laptop and a Guy Fawkes mask could hack their networks.

What would you give up for 5G?

This report comes at a time when the UK is considering a partnership with Huawei to build a nationwide 5G network.

The U.S. state department released a report last year that said Huawei’s tech left a backdoor open for Chinese spies and could not be trusted. But UK officials said they believed the risk posed by Huawei’s equipment could be “mitigated.”

This isn’t the first time the UK has raised concerns over Huawei’s cybersecurity.

Since 2012, Huawei has been continuously pledging to patch a long-list of cyber vulnerabilities. But according to the report, not a single one of those concerns has been addressed. (This is pretty much my approach to dieting.)

Tech Support: When a critical security flaw was found in a model of its routers, Routers developed a patch for it. But it only released the patch to users who reported the security flaw in their router. All other devices were left vulnerable.

The report concluded that “given both the shortfalls in good software engineering and cybersecurity practice,” Huawei’s 5G network would likely be a $%@ing mess. (I might be paraphrasing a little here.)

Can I invest in this travesty? Huawei is a privately held company, owned by its employees. However, company shareholders have said they don’t understand the company’s structure, are not updated on their holdings, and have no voting power.

Do you think Huawei’s just got a bunch of terrible engineers? Or are they be instructed by the Chinese government to leave backdoors in their devices and software?

America has a retirement crisis.

And when I say America, I mean the American people.

According to a survey by Northwestern Mutual, American’s stink at saving for retirement.

And I’m not talking about being short a few bucks here and there. I’m talking shortfalls of a million dollars plus.

Here are some of the more shocking figures from the survey:

These shortfalls are not skewed towards the young either.

Which is a problem. Because 10,000 boomers are retiring every day. And if they don’t have enough saved for retirement, that’s going to put some serious strain on the Social Security system.

More on that, and how to avoid getting caught in the trap, in tomorrow’s issue of One Last Thing.

The End of Free Speech

Don’t get caught behind the curve

Economy
Author Sean KeyesPosted on 22nd October 20155th July 2018
China's economy is hitting the skids. Boiled down to its simplest terms, the problem is that China’s money supply is too small and that's...

Economy
Author Sean KeyesPosted on 27th May 20165th July 2018
I love writing about alternative finance because I get such great emails about it. It turns out that lots of Risk and Reward subscribers...