Uber has been banned from operating in London for allowing unlicensed and uninsured drivers to pick up drunk people and take them home.

The global rideshare app initially lost its London license in 2017 but was granted two extensions to get its crap together. (It didn’t.)

Transport for London (TfL) said the app that connects car seats with stranger’s vomit was not “fit and proper” to hold a license, despite having made some positive changes for the app.

TfL said Uber had demonstrated a “pattern of failures” that put its passengers in danger. (Incidentally, A Pattern of Failures is the working title of my memoir.)

The most not-okay violation highlighted by the TfL was a loophole on the Uber app allowing anybody to upload their photo to another driver’s account. Using this tactic, drivers could bypass vetting by Uber and pick up passengers without having insurance or even a driver’s license.

At least 14,000 of these illegitimate trips have been carried out in London according to the TfL.

‘‘Safety is our absolute top priority,” said Helen Chapman, director of licensing, regulation and charging at TfL. “While we recognise Uber has made improvements, it is unacceptable that Uber has allowed passengers to get into minicabs with drivers who are potentially unlicensed and uninsured.

Uber CEO and man who’s had his testicles removed by a Saudi Prince Dara Khosrowshahi said the decision is “just wrong” and Uber had fundamentally changed how it operates in London over the last two years.

Khosrowshahi recently called the assassination of a Washington Post journalist a mistake that could happen to anyone, so his barometer for wrongness may be a little off.

Losing London would be a major hit to the taxi app and its Saudi investors. By its own admission, 24% of Uber’s sales come from just five cities, including London. (The other four are New York, Los Angeles, San Francisco, and São Paulo.)

“Any inability to operate in London, as well as the publicity concerning any such termination or non-renewal, would adversely affect our business, revenue, and operating results,” said Uber.

“We cannot predict whether the TfL decision, or future regulatory decisions or legislation in other jurisdictions, may embolden or encourage other authorities to take similar actions even where we are operating according to the terms of an existing licence or permit.”

Uber will appeal the decision in the magistrates’ court (which I presume is some sort of council of wizards) and will be able to continue to operate in the city until a verdict has been handed down.

Uber’s price per share (UBER) dropped when the U.S. markets opened this morning and is 1.3% down at time of writing.

The Inventor of the Internet Returns to Save Us All

The inventor of the World Wide Web says if you kids can’t keep your data to yourselves, he’s going to turn the internet around and there’ll be no cat gifs for anyone.

Tim Berners-Lee, who will go down in history as inventing a global system for piping red hot pornography to anywhere in the world in seconds, has unveiled a plan to “fix the internet” before we all murder each other.

Berners-Lee’s World Wide Web Foundation (remember when we called it the “World Wide Web” instead of the “Rage-Filled Hate Machine?”) has secured backing from Facebook, Google, Microsoft, and a bunch of other companies who are terrified Elizabeth Warren will eat their feet if they get out of bed in the middle of the night.

The “contract for the web” calls on companies to chill on violating everybody’s privacy all the time and urges governments to ensure everyone has access to the internet. (Because feuding with celebrities on Twitter is a human right.)

“Never before has the web’s power for good been more under threat,” CEO of the WWWF Adrian Lovett told CNBC in an interview Friday.

“We’re launching the contract for the web for the world’s first-ever global action plan to protect the web as a force for good, bringing together companies, governments and citizens from around the world to say these are the things that need to be done to put things back on the right track.” 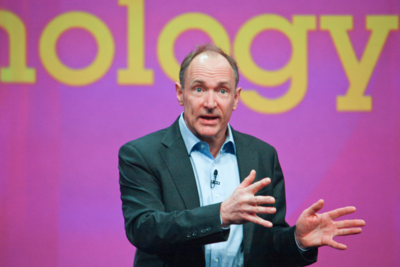 Berners-Lee’s contract to save the internet from ourselves is an idealistic set of informal rules with nine core principles and a total of 76 underlying clauses.

The contract is intended to serve as a blueprint for governments, companies, and citizens to safeguard the web as a force for good. But according to Lovett, not every organisation that backs the WWWF will have to abide by all 76 clauses.

(Because folks like Facebook want governments to think that they’re changing for the better, but would rather not change anything at all.)

”However, the reality is much more complex. Communities are being ripped apart as prejudice, hate and disinformation are peddled online. Scammers use the web to steal identities, stalkers use it to harass and intimidate their victims, and bad actors subvert democracy using clever digital tactics.

“The use of targeted political ads in the United States’ 2020 presidential campaign and in elections elsewhere threatens once again to undermine voters’ understanding and choices.

“We’re at a tipping point.”

Burglars staged a daring heist at the Dresden Green Vault in Eastern Germany this morning, stealing about 100 pieces of priceless royal jewelry.

(Oh boy, I love a good heist. If you open your email one Monday morning and there’s no issue of One Last Thing, it’s because I’ve stolen a priceless collection of fertility idols and am drinking palomas on a beach in Mexico.)

At about 4 am GMT (Greedy Man Time), firefighters were called to extinguish a fire at an electricity junction box near the vault.

Several street lights in the area were knocked out by the blaze and police suspect the burglars set the fire to disable the vault’s alarm system. (If you’d like to know my theory, subscribe to my new e-letter One Last Job and Then I’m Out.)

The burglars lifted three priceless diamond jewelry sets, each comprised of 37 parts. Officials are worried the burglars will break up the sets to make them easier to sell. (But they’re gone either way so at this point, who cares?)

Police have surveillance footage of two men bending a metal grille and breaking a window to get into what is Europe’s largest treasure collection (though it’s slightly smaller now).

The vault is home to one of the most valuable jewels in the world, the 41-carat Dresden Green Diamond. But thankfully the diamond was on vacation in New York, where it’s currently on display in the Met.

“We are shocked by the brutality of the burglary,” said Marion Ackermann, the director of the State Art Collections, describing the jewels as priceless.

“We can’t put a figure on it. The items cannot be sold on the art market legally – they’re too well known.”

Britain is in the grip of ‘Nimbys’, says Tom Bulford, selfishly campaigning against vital engineering projects that contribute to the prosperity of a once-great nation.

Investing
Author Pieter CranenbroekPosted on 26th July 2018
Owning sin stocks may be immoral or unethical. But do investors really care if they pay good money?