Design rock star and man-who-would-like-you-to-call-him-sir Jony Ives has announced his departure from Apple, leaving many questioning the future of the once untouchable tech company.

Since taking the wheel of Apple’s design team in ’96, Ives has been a driving force behind the company’s design philosophy. (Which can be summed up as “what if we took this feature out and made it a $100 accessory?”)

He was the brains behind the objectively ugly turquoise iMacs that turned Apple from a sinking ship into one of the most profitable and prolific tech companies in the world. 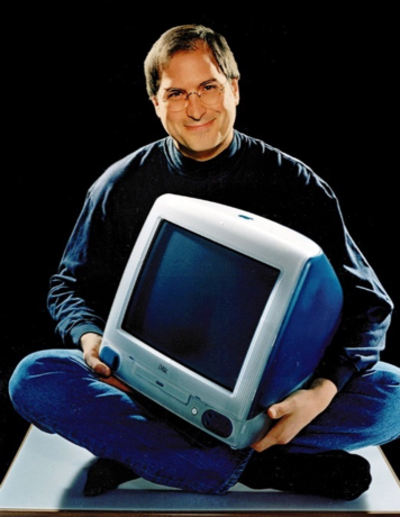 In 1998, the iMac was the best-looking home computer on the market.

And this man in mom jeans and a black turtle neck was a style icon. Dark times.

Apple CEO Tim Cook says that Ives will continue to work with the company in some capacity but right now it’s unclear how involved he will be.

“Jony is a singular figure in the design world and his role in Apple’s revival cannot be overstated, from 1998’s groundbreaking iMac to the iPhone and the unprecedented ambition of Apple Park, where recently he has been putting so much of his energy and care,” said Cook.

“Apple will continue to benefit from Jony’s talents by working directly with him on exclusive projects, and through the ongoing work of the brilliant and passionate design team he has built. After so many years working closely together, I’m happy that our relationship continues to evolve and I look forward to working with Jony long into the future.”

All About Dem Debates (Part II)

Last night was the second round of the Debate of a Thousand U.S. Presidential Candidates.

I can only talk about U.S. Election 2020 for so long before I get hives, so let’s get this thing started and blast through some of the highlights and lowlights. (And the downright weirdlights. Marianne Williamson: looking at you, girlfriend.)

The Moment Everyone is Talking About

Harris hijacked a question on police brutality to Pete Buttigieg (somewhat awkwardly) to put Biden on blast for recent comments he made about creating common ground with segregationist lawmakers.

The Californian senator, who was actually in one of the first classes to integrate into public schools, also dragged up Biden’s opposition to bussing (the practice of integrating education by bussing black kids to predominantly white schools).

“There was a little girl in California who was part of the second class to integrate her public schools, and she was bussed to school every day,” she said. “And that little girl was me.”

Biden called Harris’s attack a mischaracterisation of his record before interrupting himself, mid-rebuttal, to announce “my time is up.” (Who needs Rachel Maddow when Biden will just moderate himself?)

His fellow Democrats seem to have agreed with the sentiment, launching an all-out attack on the former Vice President. Biden spent the entire debate on the back foot, defending his past record and looking genuinely surprised that everybody wasn’t kissing the ground he walked on.

Old Joe may still be the frontrunner. But after that weak performance, he won’t hold the same commanding lead he entered the debates with.

Pass the Torch… Or Don’t

Thirty-eight-year-old Eric Swalwell drew groans from the live studio audience when he told Biden it was time to “pass the torch to a new generation.”

Senator Bernie Sanders responded before Biden even bat an eyelid, saying: “The issue is not generational … The issue is who has the guts to take on Wall Street, to take on the fossil fuel industry, to take on the big money interests who have unbelievable influence over the economic and political life of this country.”

Bernie came out of the debate generally unscathed. He had neither a breakout moment nor any clear disasters, opting instead to stick to classic pitchfork wielding Bernie-isms like “taking on big money interests.”

While the rest of the donkeys tackled some heavy topics like race, civil rights, and healthcare, presidential candidate Marianne Williamson was having a spirited debate with the inside of her own brain.

Williamson said you can’t beat Trump with plans and policies. What you need is a tight slogan that will look good on a hat.

“He didn’t win by saying he had a plan, he won by simply saying ‘Make America Great Again.’”

When Chuck Todd’s tiny goatee asked the candidates if they could pursue a single policy in their first year of their presidency, Marianne melted into a puddle of rainbows and energy crystals.

You know, if Marianne doesn’t become president (can you imagine?), I hear there’s an opening for Secretary of Feel-Goodery and Empty Platitudes.

Reservations for Taco Bell’s pop-up hotel just sold out faster than it takes a Crunchwrap Supreme to blast through your system.

For four days in August, the creator of many delicious alternatives to laxatives will take over the V Palm Springs Hotel and rebrand it as “The Bell” — a Taco Bell themed hotel. 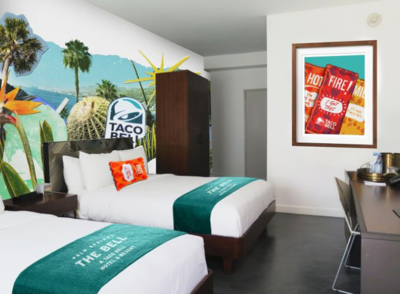 Hey! I have that exact same wall art.

Rooms, which start at $169 a night, sold out within two minutes. There were so many people trying to snap up a night in the fast-food-restaurant-themed hotel, Taco Bell’s entire website crashed.

“Taco Bell fans are truly one of a kind and today was one of the best expressions of that fandom yet,” said Taco Bell’s Chief Global Brand Officer Marisa Thalberg, laughing maniacally.

Guests of the hotel will be taken on a culinary journey by Rene Pisciotti, the Taco Bell chef who “invented” Nacho Fries. (Working in the Taco Bell product kitchen must be a lot like being stoned all the time.)

The Bell will feature a Taco Bell gift shop and an on-site salon with Taco Bell-inspired nail art and hair styling services (because we know you feel your best when you look like a Nacho Cheese Doritos Locos Taco Supreme.)

Coming soon: a limited edition Wendy’s-themed Urgent Care center and a Burger King where you can vote.

A woman in Utah falsely reported that her husband killed her… 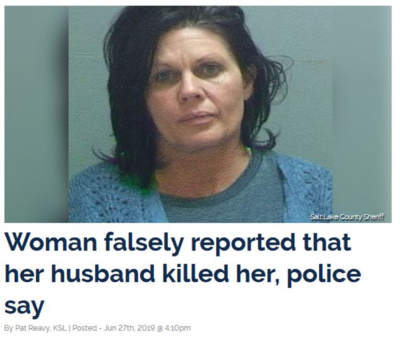 According to a report by ProPublica, a non-profit hospital is making millions of dollars from suing poor folk.

Now, in case it wasn’t obvious from the name, non-profit hospitals pay virtually no local, state, or federal tax. In return, they are meant to offer community benefits and treat the poorest members of the community (not sue them).

In just five years, the Methodist Le Bonheur Healthcare in Memphis U.S. has sued 8,300 people for medical costs, including many of their own staff who can’t afford their outrages prices.

One 63-year-old woman was charged more than $12,000 for a single overnight stay in the hospital — except no one told her that. According to the woman, she never heard about the bill until the hospital sued her for the amount plus damages (and won).

Now this woman who lives below the poverty line owes $33,000 for the price of the bills, the cost of the hospital’s attorneys, and court costs. Last year, she made less than half that amount in wages.

If she makes every payment, and the Methodist doesn’t add any interest to her debt, she will be 90-years-old when she pays it off.

In debt until 90. For one night of emergency care. And all of this is legal under the current U.S. healthcare system.

This system isn’t a mess. It’s a god-damned nightmare.

Politics and markets all mixed

Economy
Author Kit WinderPosted on 16th October 2020
“Green” stocks have performed outrageously well in the last 18 months. James just sold another stock in his Exponential Energy Fortunes portfolio for a...
Economy
Author Kit WinderPosted on 3rd March 20212nd March 2021
For all of our faithful lip service, gold has had a bad six months and a worse February to top it off. What’s going...

Economy
Author Zach ScheidtPosted on 22nd November 2019
As the father of seven kids, I often feel like my full-time job is handling minor emergencies. One day my daughter gets stranded and...