According to 4,000 pages of documents obtained by NBC News, the lizard man from outer space has been leveraging Facebook user data to control companies its partnered with.

The documents, which span from 2011-2015, contain private emails, web chats, meeting summaries, spreadsheets, and presentations from inside the company. (Plan on violating your user’s privacy? Make a PowerPoint about it. Make it fun.)

The documents detail several instances where Facebook would reward law partners with user data or withhold it when a partner got too big for their own good.

For example, per NBC News’s investigation:

“Facebook gave Amazon extended access to user data because it was spending money on Facebook advertising and partnering with the social network on the launch of its Fire smartphone.

“In another case, Facebook discussed cutting off access to user data for a messaging app that had grown too popular and was viewed as a competitor, according to the documents.”

Facebook execs discussed several payment options that loyal partners could use to “thank” Facebook for your personal info and vacation pictures. (The tech business must run on photos of retirees two margaritas deep on a beach in Cancun.)

Facebook stopped short of requesting direct payment. (Because then they could still say “We don’t sell user data” and have it technically be true.)

You know, there’s a fresh privacy scandal with Facebook every week. And while young folks seem to be moving away from the platform, a lot of folks are still clinging onto their profiles.

I want to know what keeps folks in the old data harvesting farm? Is it a networking thing? Addiction? Or do folks just not care about data privacy as much as the media makes out?

I had presumed this law was put in place to extinguish media criticism of Mr. Putin and his cronies. But the law seems to be a touch more dystopian than I had originally intended.

A Russian news site in the Russian city of Yaroslavl (I hear its lovely this time of year) was taken offline earlier this week for content deemed too disrespectful for Russian eyes.

Apparently, the news site had the nerve to report on the existence of some anti-Putin graffiti. Aaaaand that’s it.

No biting satire. No manifesto for a better Russia. Simply a report that someone else had vandalised a wall with some profanity that happened to about Putin. 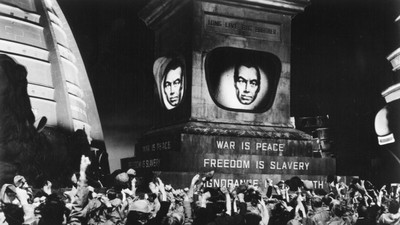 Aw sweet. The new season of Big Giant Head is out.

So it seems like they have skipped over the destruction of free speech and gone straight to the “no negative criticism of our leadership exists” stage of their dystopia.

Think about that. Imagine if our president had the New York Times or Huffington Post taken offline because they simply reported on the existence of some graffiti.

I’m sure some folks would get a kick out of it. But the beautiful thing about living in a free society is that you get to ridicule your leadership no matter who they are. (The only difference now is that the leadership is more likely to ridicule you right back.)

Meat or No Meat: The First Vegan Burger Goes Public

“Red meat is not bad for you. Now blue-green meat, that’s bad for you!”

Vegan foods company Beyond Meat is gunning to be the first meat-free meat company to IPO.

The vegan food company just applied to be listed on Nasdaq with the symbol “BYND.” (You guys know “MEAT” is still available, right?)

Give Peas a Chance: Beyond’s flagship product, the Beyond Burger, is a burger patty made with protein extracted from yellow peas. The protein is treated in a lab to look, taste, and have the texture of ground beef.

The Franken-burger maker did not specify an estimated price range for the stock or a target price for fundraising. It’s likely trying to gauge investor interest based on the strength of the prospectus first.

A Meat by Any Other Name

In a letter included in the prospectus, CEO Ethan Brown laid out his vision to redefine the word “meat.” (Like how Jimmy Buffett redefined “retirement” to mean “getting wasted on a tropical beach.”) 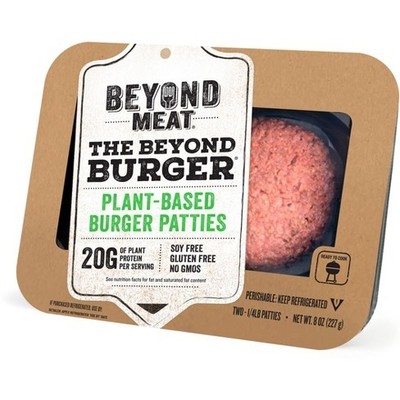 Is it just me or does “Beyond Meat” sound like there should be even more meat in it?

It should be noted that this isn’t just the ramblings of a crazy man who wants to take a plate of veg and call it his meat.

Brown is addressing a specific argument raging in the food industry right now: whether or not food substitutes can use the name of the product they’re replacing in their branding.

Recently, the FDA has signaled a potential crackdown on almond and soy milk, which would fall into the same category as Beyond’s burgerless burger.

According to the Institute of Justice, calling these products milk “would confuse consumers, harm small businesses across the country, and raise serious First Amendment concerns.”

Far be it from me to question the Institute of Justice, but if you think the existence of almond milk is infringing on your First Amendment rights, you have not read the First Amendment.

I don’t think anyone is actually confused if soy milk comes from a soy cow. But that’s the argument the dairy lobby (AKA Big Cheese) is making — and it has more pull than you’d think in Washington.

In 2018 alone, the Legion of Lactose spent $7.5 million lobbying in Washington. And over the last three years, it increased its political contributions from $3 million to $5 million.

Of course, that’s nothing compared to spending from the likes of the oil & gas lobby. But with over 42,000 dairy farmers in the U.S., the dairy lobby holds sway over an impressive chunk of voters.

The FDA’s decision on soy and almond milk will have a direct effect on how Beyond Meat can market its product. (“Meat” is right there in the name. It would have to change to Beyond Pea-Protein. Not as catchy.)

But the “meat” in Beyond Meat is crucial to its marketing strategy. The company doesn’t even advertise itself to vegans and vegetarians. (And why would they? They only make up 5% of Americans. Even if you nab every veggie hound in the country, that’s a bite-sized market.)

Instead, Brown is targeting the growing market of meat eaters concerned about the adverse health effects of red meat.

We’ll check in with Beyond Meat closer to its IPO date.

For now, I’d like to know if you think vegan meat should be able to call itself “meat?”

Are we splitting hairs? Or is this genuinely misleading to uninformed customers who think they are getting a fine slab of Angus?

Have a heart. Heck, have two. We can mass produce them now.

Researches at Tel Aviv University have successfully 3D printed a human heart using cells and organic matter from a patient. (And like all great medical advancements, it’s gross and weird.)

The 3D-printed heart is a milestone of years of research, which seeks to completely remove the need for organ donors.

The heart is a scale replica of a full human heart, complete with cells, blood vessels, Ventricles, and chambers — all made with organic matter. (I only use organic farm-to-surgery-table hearts.)

Researchers built the heart with fatty tissue extracted from the patient. So, the next time your wife gives you a hard time about that second burger, tell her you’re just storing building material for your second heart.

The heart is only about the size of a rabbit’s heart. Which means we’re still a few years away from human testing. But researchers predict there will be an organ printer in most hospitals in as soon 10 years’ time.

This is another cutting-edge medical breakthrough we’ll be keeping a close eye on.

Stock market to carmakers: hurry up and go electric

Economy
Author Jim RickardsPosted on 7th March 20185th July 2018
The Fed says incessantly that "price stability" is part of their dual mandate and they are committed to maintaining the purchasing power of the...