This is a day whose story has passed into stock exchange folklore – a market crash like no other. Black Monday saw the biggest percentage drop in Wall Street’s history. And equities all around the word plunged in sympathy.

Millions of investors were taught some very serious lessons. Fortunes were lost within a few hours as panic set in. And the burning question that’s on many people’s lips today is: could the 1987 crash repeat itself soon?

In 1987, I was working in the City as European equity fund manager. Black Monday itself is firmly etched in my own memory.

The backdrop was already quite surreal. The previous Friday had seen the London Stock Exchange closed by the ’87 Great Storm (yes, the one the BBC weather forecast assured viewers wasn’t on the way).

As share prices cratered in a selling frenzy after the UK market re-opened on the Monday, it felt like the world was about to end. I remember sitting at my dealing desk wondering if prices would ever stop falling. Eventually I just turned off the screen. It was too scary.

Here’s the cover of The New York Times from the following day:

$500bn was wiped off the value of America’s Dow Jones Industrial Average (DJIA) alone. The Hong Kong stock market was so freaked, it shut down for a week.

So was the ’87 crash foreseeable? Maybe.

It’s an old market adage that ‘they don’t ring a bell at the top’. But there were several danger signs for those who chose to see them.

In the months pre-crash, the US market in particular became awash with increasingly dodgy IPOs (initial public offerings, i.e. when a company’s shares are quoted for the first time). Each listing came with a wordy prospectus put together by an expensive investment bank.

One of my colleagues in the American office used to stack up these IPO documents from floor to ceiling. When the pile collapsed, he said, that would be his sell signal.

I never did find out if the prospectus mountain toppled over. But when everyone’s trying to sell you their equity, it’s a strong hint that you shouldn’t be buying it.

Also in the months leading up to October 1987, I recall thinking how febrile European markets were becoming. It seemed like every share, be it good, bad or indifferent, was climbing far too fast for comfort. So I started building up liquidity. By Black Monday, my portfolios contained about three times their usual cash percentage, which at least lessened the damage being inflicted on the rest of my holdings. 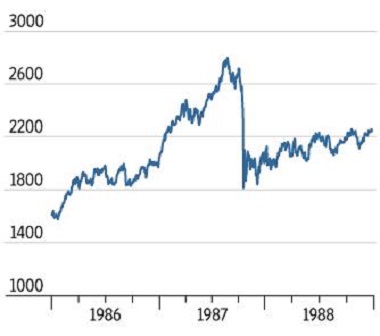 You can see how much US stocks had risen prior to the October 1987 collapse (in fact despite this, you’ll note that the index at the end of 1987 was actually higher than at the start).

Some analysts even began comparing the Dow’s surging performance with 1929. Good call.

As you’ll see from that NYT page above, geopolitical and economic tensions were also circulating. There were ‘handbags’ in the Arabian Gulf, for example. More important, the Fed was steadily raising interest rates to curb inflation. From the start of 1987 to 7 October, the US prime rate was hiked from 7.5% to 9.25%. That’s generally bad news for stock prices.

Also accelerating was institutional investors’ use of programme trading. This took the form of computerised selling to protect portfolios against further stock falls. But when everyone is unloading assets at the same time, prices can – and did – drop sharply. The full effects of programme trading weren’t appreciated at the time. They only become clear after the crash.

Adding this up: although it had outside influences, Black Monday was largely a stock market rather than fundamental event.
So could it happen again?

Due to circuit breakers that have since been inserted into US financial exchanges, a single trading session plunge as large as 1987 is less likely nowadays. Yet several similarities exist between October 1987 and the present time. In fact, on some counts today looks a lot worse.

The global economy seems in reasonable shape at the moment. Not brilliant, but OK. The outlook is uncertain, though. The Fed is raising interest rates, prompting fears that economic growth could be curbed, with another recession possible.

My colleague Jim Rickards at Strategic Intelligence has written several articles exposing underlying weaknesses in the world’s financial system, its dependence on vast debts and how another crisis could occur.

He’s also highlighted ways in which you could even prosper during such a crisis. Indeed, with Geo-political events kicking off again (e.g. North Korea), I would suggest that now is the perfect time to watch this special briefing from Jim if you haven’t already.

Institutional investors still move as a herd. Greed and fear continue to be the major drivers of stock prices.

Greed has appeared in the relentless rise in financial markets. Not just in the last 10 years but for at least three decades. Here’s a great chart from Jim Reid at Deutsche Bank: 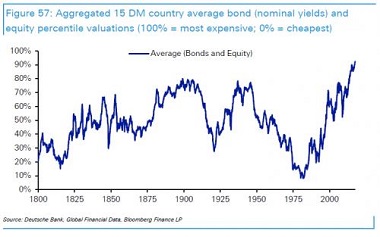 It doesn’t need too much explanation. The current cocktail of bond and share prices is at its most expensive in more than 200 years.
Bonds have been the largest factor in this. But US equities, which drive global stock indices, are arguably already in ‘bubble’ territory.

Here’s the latest chart of the cyclically-adjusted price/earnings ratio (CAPE – I’ve written about this previously in Daily Reckoning.It’s amazing that despite so being dramatic at the time, 1987 doesn’t really register on this. US share prices are now much pricier than 30 years ago. In fact they’ve reached 1929 levels of expensiveness, with only the 2000 dotcom bubble higher in terms of overvaluation 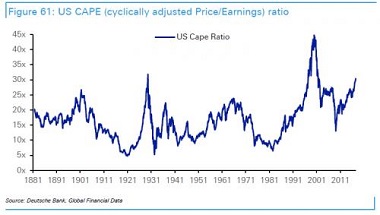 Granted, valuation extremes don‘t have to end in a crash. They can be resolved via a gradual earnings recover and market slide. That could happen too. But back to human nature – markets tend to over-stretch and then correct sharply. It’s just what they do.

So yes, I believe there’s a high chance of a crash repeat. Of course, I’ve no idea when it could be. Nor does anyone else. But we need to be aware of the risks.

And to make matters worse, there’s also the odd hurricane around…

P.S. Remember, if you’d like to find out more about how to best protect your wealth during a financial crash, my colleague and ex financial threat analyst for the Pentagon, Jim Rickards, is probably the best person to help.

You can read more about what Jim calls his “most important work to date” here.

To build 10m electric cars, you need this rare metal

With Brexit you can’t always get what you want

Economy Stock Market
Author David StevensonPosted on 4th May 20185th July 2018
"Sell in May and go away, come on back on St Leger's Day"

Stock Market
Author Sean KeyesPosted on 5th November 2018
After five or so years of eerie calm, stock markets have kicked off. Should investors sell or stay put?

Stock Market
Author Kit WinderPosted on 31st July 202031st July 2020
How are things looking for the markets right now? Advanced warning, this is going to be a chart fest of epic proportions. With some stocks bursting up thousands of...
Load More